320 employees in Colombia donate 11,000 euros to tackle the pandemic

Over the past three months, the Company has raised almost 11,000 euros in this country, with which it has purchased food and other basic necessities for the families who need them the most.

The donation, made in April, May and June, consisted of 700 food kits and 700 hygiene kits, which have been distributed to families in Soacha, Bosa, Ciudad Bolívar and Tunjuelito, among other places. They were distributed with the collaboration of MAPFRE volunteers, Bogotá’s Transit Police and various company providers in the country. They have organized entertainment activities, raised spirits and provided emotional support to the community and helped promote protection measures in different neighborhoods of the capital.

During this time, food and hygiene products have also been distributed to the indigenous families of the Chamí and Catíos ethnic groups, who arrived in Bogotá as a result of the health crisis after being previously displaced by armed conflict. They are currently living in public spaces, parks and sports fields around the city. The provision of basic necessities has also helped 140 vulnerable families in Ciudad Bolívar, who receive support via the Laudes Infantis and Waldorf foundations. 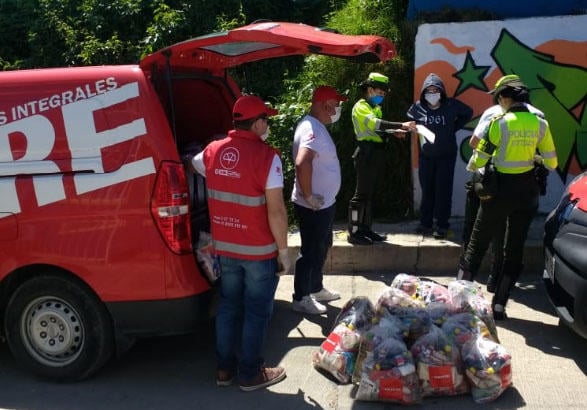 In the last few months, MAPFRE has started up virtual volunteering in Colombia with the aim of providing friendly and personal telephone support to older people, currently suffering from loneliness as a result of being isolated in their homes. In the last quarter, a total of 31 activities have been carried out, involving a total of 144 volunteers.

These activities are in addition to others already carried out in the country such as the Fundación MAPFRE Wing at the SHAIO Clinic in Bogotá, an ICU with the equipment needed to treat COVID-19 patients, as well as the healthcare equipment that the Company has donated to two hospitals in Tumaco and Bogotá.